The COVID-19 outbreak and subsequent shutdowns worldwide have so far acted as a much more powerful disruption* to the economy and existing business models than any technological change so far.

On the one hand, the crisis has served as an accelerator for change processes and initiatives that had already started to emerge before. On the other hand, some changes are the direct results from the crisis – and they hit some organisations hard. Others have greatly benefited from the pandemic and the new wants and needs it has generated.

In the context of World War II, Winston Churchill famously said: “Never let a good crisis go to waste”. A sound piece of advice that we should take on board and act upon right now.

This article has been first published in our initiative*magazine #14: „Mergers, Acquisitions and Carve-outs: Reshaping for success“ (free download).

There are Winners and Losers in any crisis

There are always winners and losers. In times of crisis, it clearly reveals whether one is performing well or not (under the circumstances). In addition to those firms that “coincidentally” offered a product or service that became in high demand almost overnight (e.g. mask or disinfectant producers), the “quick winners” of this crisis are those companies with digital business models by nature (e.g. video conferencing and digital collaboration tools) or that could undergo the digital transformation swiftly (as some retailers did).

For these organisations, COVID-19 acted as a stimulus package. In contrast, we can find “quick losers” among the firms whose business models are by nature analogous. The event and tourism industry delivers plenty of prominent examples. The quick winners and quick losers being the extreme poles of the spectrum, there are many organisations in a limbo situation. They try to understand which of the consumer trends and behaviours of the past months will last and to figure out what “normality” will look like once we get out of the crisis mode.

COVID-19 put industries and organisations under great stress and revealed which industries and organisations are healthy, resilient and adaptive enough to cope well in this situation. It pushed some to successfully roll out major changes at a pace that was not even thought as possible. For others, it put a brutal end to their story and acted as the last straw that broke the camel’s back.

Regardless of whether or not life will ever bounce back to where it left off before the crisis, we can learn from the organisations that were the most negatively affected by COVID-19 (see Info Box next page) that it is a worthwhile, and maybe lifesaving exercise to analyse and examine one’s own business model thoroughly and to assess (again) one’s strengths and weaknesses. A good start is to carefully (re-)inspect (among others) one’s elasticity of demand, capital coverage, financing cycles and options, but also – and maybe most importantly – to identify the stage of the product life cycle their key money making products and services are currently at.

On the other side, we can observe that some companies which are not necessarily among the beneficiaries of the pandemic, have weathered the crash fairly well and are recovering faster than others in their sector. Although a pandemic of this magnitude may not have been considered in their plans, they moved quickly to remote working and took measures that kept them operational. Many projects and operations returned to a new normality within a few hours or days.

This set them apart from their direct competition that in contrast had to notice that their bandwidth, security systems, policies, regulations, work environments and equipment at home were insufficient to meet the requirements of effective remote working. In addition, the level of self-discipline this aspect of “new work” requires provided for a range of individual and team problems. Those issues often caused those organisations to lag behind in adapting their product and/or service portfolio to leverage the new demands.

A large majority of firms still face these problems. COVID-19 will continue to be a tough challenge. It is, therefore, not surprising that economic experts around the world expect a surge in mergers and acquisitions that will reshuffle markets on a global scale.

As many organisations are struggling and fighting for their lives, entrepreneurs and investors with money are planning their shopping tour.

These are good times for buyers. Their considerations may include:

On the other hand, organisations that are running low on cash have other considerations to make, which may include:

In general, mergers and acquisitions suffer from a bad reputation thanks to plenty of worst practice examples"

It is now to be seen which companies will make good or bad purchases and which mergers will be successful. In general, mergers and acquisitions suffer from a bad reputation thanks to plenty of worst practice examples that led to painful experiences.

But in best practice examples, these can also be very positive acts towards more healthy organisations in all regards. These not only include financial and performance aspects but also employee satisfaction and motivation.

One of the observations that could be made during the Corona lockdown (at least in Germany) was the appearance of “Give Away” boxes, as many people used the opportunity to clean out their flats and houses. Items that were no longer wanted or needed were gathered in these boxes and placed in front of their houses for others to take. Not long after, the boxes were empty underlining the truth in the saying “one person’s trash is another person’s treasure”. Although something has lost its use for one person, it may still be of value to another. Instead of just wasting away unnoticed in a basement, discarded items can find new purposes.

This idea also works on the organisational level and is a good perspective to take in regards to mergers and acquisitions. For many organisations, now is the right time to clean out the basement and identify areas and business units that may waste away but could be of much greater value if they were placed in a different context. This offers new potentials to both sides: the organisation that frees up capacities as well as financial resources and the area or business unit that is to receive a new life and spirit, and thus motivation.

At the same time, struggling companies may also be well advised not only to think about selling and saving money but also about merging, entering strate-gic partnerships or even buying. Again, someone else’s trash may be one’s treasure. As it is a buyer’s market, there may be good deals and win-win situations out there. There is hardly a faster way in gaining new competences, experience and expertise.

This article was first published in our initiative*magazine #14:

Get your free copy here

A Chinese proverb says: “The best time to plant an apple tree was twenty years ago. The second best time is now”. Although statistically not an “unknown unknown” risk, COVID-19 hit almost everyone unprepared. Companies could have been better organised as experts warned about the possibility of a pandemic and its consequences. There were recommendations for organisations to prepare for these – but for most of us, this was considered as a thing of the past or reserved to poor countries. The awareness and urgency for this type of threat is here right now. According to Kotter’s change model, “create a sense of urgency” is a pre-requirement for an effective change. A crisis situation generally lowers the bar of resistance to change. It is a good moment to reconsider business models, finance models, products, services, operations and projects. It is a good moment to separate or join forces in order to open up and create new opportunities. It is a good moment to improve the organisation’s resilience in regards to systems and operations as well as culture and mentality. For many companies that are struggling but still surviving, it is not too late not to let a good crisis go to waste.

The best time to plant an apple tree was twenty years ago. The second best time is now."

COVID-19 is neither the first nor the last crisis. Climate change, economic shocks and consumer trends are just some of the hazards that can dramatically affect the way an organisation does business and survives. To foresee all potential scenarios and prepare for them is impossible for human beings. Artificial intelligence is surely going to be of great help in this endeavour. Nevertheless, companies are well prepared for all circumstances if they have a firm understanding of their strength and weaknesses, have agile, flexible, entrepreneurial systems, structures and mindsets in place to be able to react to market changes, risks and opportunities regardless of their triggers. In this context, mergers and acquisitions have to be better integrated as organisational tools for companies to reinvent themselves, reshape and continue to move forward. It is time to brush off the negative connotations and refocus on what mergers and acquisitions really are: not just a financial transaction, but the process of two organisations combining (or splitting). This is a delicate act on multiple levels, of which the financial and legal sides are the rather easy tasks.

How to organise for M&A, Carve-out or Post-Merger-Integration?

Get your team ready for all your M&A, Carve-out and Post-Merger-Integration with amontis! We designed this bootcamp to cover the process from crafting a M&A strategy to the actual implementation of a carve-out or the integration of an acquisition. We address the adequate post-merger-integration approach and stages the different keys for the success – in a remote or face-to-face format.

If you need further consultancy, just get in touch with us – our first conversation is free of charge.

The amontis Business Panel is a virtual event that aim to give you
professional impulses and expert discussions about actual business
shaping topics. For more info, click here. 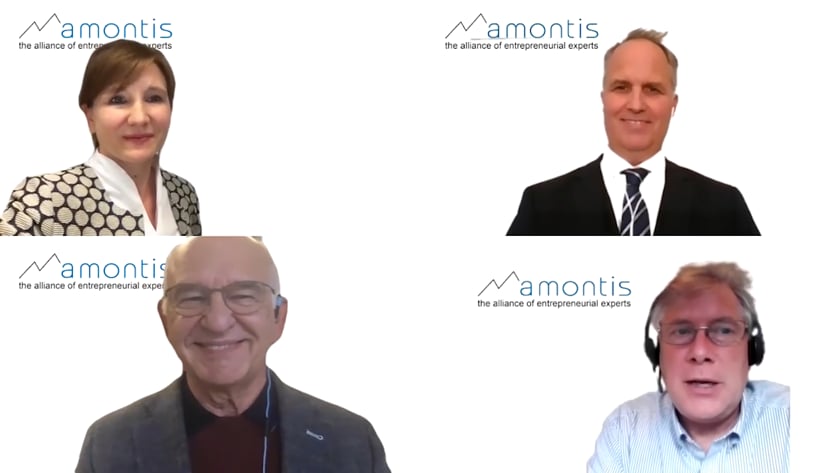 Federico is managing the change on digital transformation along with new (digital) business models. He uses advanced technologies, i.e. AI/Machine Learning or Blockchain, where appropriate, he restructures where needed, or consults on M&A or Financing where required.

Roland Dumont du Voitel looks back on many years of experience in consulting and managing corporations through tough times of turnarounds as well as coaching senior managers to find their way in times of changes, mergers and acquisitions.

Starting in 1999, Hugo built and ran the „Acquisition Finance“ team at Crédit Lyonnais‘ Frankfurt office, until he left in 2004 to launch his own consultancy company. His main focus during the time at Crédit Lyonnais was the structuring of LBO/MBO financings for private equity firms in Germany, Austria and Switzerland.

Mathieu Blondeau is a Marketing specialist with a strong international background. Open-minded and motivated, he gives the best to overcome new challenges.

amontis is the alliance of entrepreneurial experts.

This website uses cookies to improve your experience while you navigate through the website. Out of these, the cookies that are categorized as necessary are stored on your browser as they are essential for the working of basic functionalities of the website. We also use third-party cookies that help us analyze and understand how you use this website. These cookies will be stored in your browser only with your consent. You also have the option to opt-out of these cookies. But opting out of some of these cookies may affect your browsing experience.
Necessary immer aktiv
Necessary cookies are absolutely essential for the website to function properly. This category only includes cookies that ensures basic functionalities and security features of the website. These cookies do not store any personal information.
Non-necessary
Any cookies that may not be particularly necessary for the website to function and is used specifically to collect user personal data via analytics, ads, other embedded contents are termed as non-necessary cookies. It is mandatory to procure user consent prior to running these cookies on your website.
SPEICHERN & AKZEPTIEREN